Note: This is a guest post by the male side of PawsAndPours.

Its been a while since I did a beer review. A few nights back, one of our friends brought over some Bowser Beer. Now, this friend has known Chase since he was a puppy, so just seeing him is a treat for Chase. But when he brought over an even more special treat, he definitely moved to the top of Chase's "favorite visitors" list. 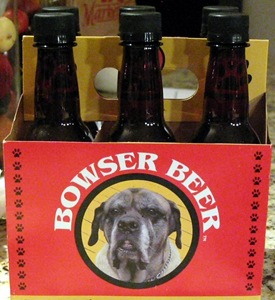 I'm sure you are all dying to know....what exactly is Bowser Beer? Its the PawsAndPours way of sharing the pours with Chase. The Bowser Beefy Brown Ale is described on the their web site best:

"Put some party in your animal!! - Dogs are known to love beer and now their owners can treat them to their own festive, delicious brew. Why share when you have a better alternative? Hops and alcohol free, Bowser Beer is made with 100% American-made beef broth (made from real beef, not out of a can) and malt barley (good for their coats). Low in calories and fat, we have now added glucosamine! It’s a party in a bottle! Bowser Beer is a unique gift for the pet who has (almost) everything."

Note that we don't have a special drink bowl for Chase, but he is still anxiously waiting for it...Chase gives it two paws up! (Or is it bowl-licking good?) 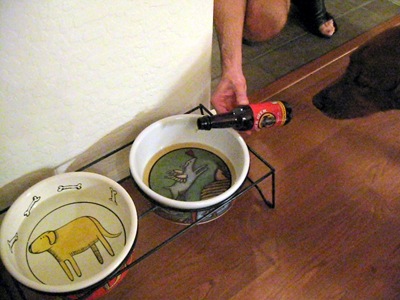 Now that Chase his his drink, time to figure out what I'll have. During a recent trip to Total Wine, I picked up a selection of seasonal beers. It seems that the craft brewers are following along the winemaker trend, and creating catchy labels with off-the-wall names. So of course like any good consumer, I looked for those. Tonight's selection: Dogtoberfest.

Dogtoberfest Marzen is made by Flying Dog Ales. The Dogtoberfest has a deep mahogany color with a caramel finish. Like most Marzen's, it has a malty finish. Not my favorite Marzen of all time, but definitely one that I would get again. 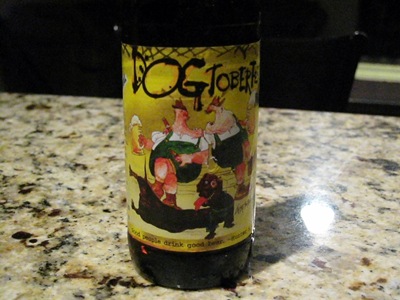 That label is hilarious!

oh my gosh! I have to get some of the Bowser Beer for my dogs! Do you know where I can find it?