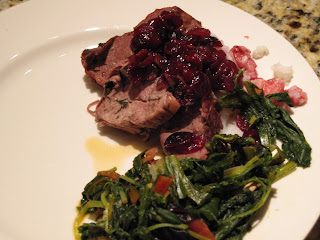 A couple of nights ago, it was pouring rain and cold here in the desert. I was planning on going to Kierland for some Christmas shopping, but decided to stay home and cook instead. (Since I'm not a big fan of shopping, this isn't a big stretch.) I had a pork tenderloin in the refrigerator, that was originally going to be grilled. That idea was nixed by the rain. I preheated the oven (hoping to warm up the house) and searched the internet for some inspiration. I was not about to run out to the grocery store, so I was also looking for something that would use up things I already had on hand. So, as I usually do, I borrowed from a few recipes to pull together the final product. My end result was roasted pork tenderloin with a dried cranberry merlot sauce. Rolling the pork in a mixture of sage and thyme before searing gave it that wonderful winter-ish flavor that we were craving this evening.

Preheat oven to 400. Prepare the pork by combining the first 4 ingredients; rub evenly over the pork.

Heat a large skillet over medium high heat. Coat pan with cooking spray or light olive oil. Add pork; cook 4 minutes on each side to brown. Take pork out of the pan and put in a baking dish. Place the pork in the oven for 12-15 minutes, or until the pork is 160 degrees.

While the pork is roasting, add the chicken broth, dried cranberries, wine and juice to the pan that you sauteed the pork in. Bring to a boil, scraping the pan to loosen the browned bits. Stir in jam; cook 8-10 minutes or until the mixture is slightly thick, stirring occasionally. Cut the pork into medallions and serve with the sauce.


The side I added was braised greens with a pomegranate vinaigrette. I had 3 - 1 lb. bags of mustard greens and dandelion greens from our CSA. 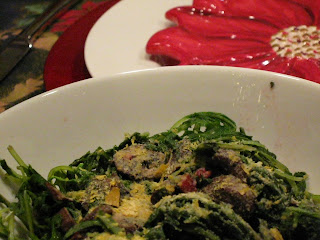 Look how the greens cooked down, resulting in 2 servings that all fit in this medium sized bowl. (I can add the recipe if anyone is interested.)

Finally, I had some grits to which I added a couple of tablespoons of gorgonzola. This made a nice base for the sweet pork medallions. You can't really see the grits under the pork in the picture, but they were so easy and so delicious. The addition of gorgonzola was the difference in bumping this plain starch up a notch. 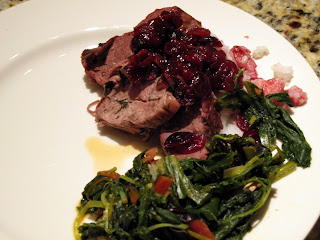 Of course this meal wouldn't have been complete without a bottle of our current favorite merlot - the Avila. Slightly jammy, it not only paired well with the food, but gave a nice warm feeling to this chilly night.
Posted by Mo at 2:38 PM

Oh Yum! And perfect for the cold, rainy nights we've been having. Its made cooking - and heating up that stove - so much more satisfying!

Oh yeah, I just scour the internet, make some stuff up with what I have on hand, and frequently wind up with something that looks and sounds this good. I actually printed this out, which pretty much never happens.

I'd love the recipe for the greens! It looks a lot like a chard/kale with pancetta and shallots that we make a lot.

Thanks for stopping by Swirling Notions -- good to see you there!