Why I enjoy cooking so much more than baking

Long before I ever really took an interest in cooking or subscribed to the plethora of cooking magazines that I do now, I had to occasionally throw a meal together for a date, or parents, etc. I usually cooked something fairly simple, or done from memory. Stirfrys were a favorite, as was a piece of seabass or salmon on the grill with some mango salsa. But, the key to any of this 'cooking', was that there was. no. measuring! To this day, I can't bake, because I hate measuring and following explicit directions. I'm a rebel that way.

This simple shrimp sautee is a dish I came up with at over 12 years ago, trying to replicate something I had ordered at the Redwood Room in Rochester, MN. It is still one of my favorite "go to" dinners when I want something easy, and satisfying. Of course, the theme of this is use what you have in the refrigerator, and don't worry about measuring. The recipe that I include is of course, an estimate of amounts. The basis of the flavor is wine, butter and chicken broth, but the capers or kalamatta olives can give another dimension. Top with a sprinkling of fresh basil or chives, and spoon over rice, grits, or pasta and you'll have a delicious dinner, in less than 20 minutes. 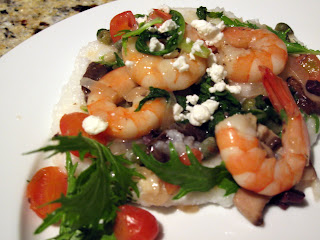 (remember all amounts are estimates)

Heat skillet over medium high heat. Put in butter and melt, add garlic and onion and cook 2-3 minutes. Add wine and chicken broth and let cook for 5 minutes until slightly reduced. Add shrimp, tomatoes, wine, and any optional ingredients. When shrimp is done, take pan off heat and add cheeses and fresh herbs.

For Grits: make according to package instructions, in the last minute of two of the cooking time, add about 1/3 cup feta or goat cheese.

We served this with the Bridlewood Viognier. It may have gone better with a pinot grigio or albarino, but oh, how I love viogier! Especially when it is not overly oaked or cloyingly sweet. This had a beautiful bouquet that when taking a wiff was like a treat in itself. Mmm...almost seductive!
Posted by Mo at 6:03 PM 2 comments:

Maybe it was eating a lot of chicken (fried that is,)growing up, or maybe it is the way I cook it, but in the past 5 to 10 years, chicken has just been something I don't care to eat. Well, okay, maybe an occasional quesadilla or something where it is disquised enough by other flavors, but I certainly don't go in search of it. It is usually dry, tasteless and sometimes even stringy. So, when Scott wanted to do chicken one night, I was at a loss. The only other chicken dish that I've made in the past couple years and really enjoyed was Chicken Scallopini with Morels and Spring Vegetables, and that was too time consuming for this busy weeknight. So, I said to him, "if you want chicken, you have to come up with something we can do with it." Well, maybe I should do that more often! He went to the pantry and picked out an old Cooking Light Annual cookbook. After looking through the index, he exclaimed he found the perfect recipe for us. I was curious to see what he had picked out.
...
...
...

I know, the suspense is killing you...

I was less than thrilled. Again, I just can't get excited about anything chicken. But, also I am not a big fan of lemon in warm savory foods. That said, I liked that I didn't have to make the decisions and gave in to try it. We got to work on a little wine and a little cooking. We followed the recipe almost exactly -the only change being to add a few sliced mushrooms and a little bit of fresh chives. 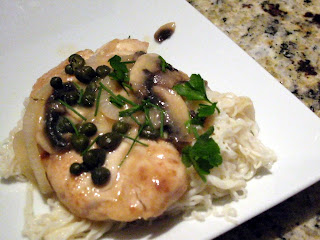 Heat oil in a large non stick skillet over medium high heat. Add chicken; cook 4 minutes on each side or until browned. Remove chicken from pan. Add wine to pan, scraping to loosen browned bits. Reduce heat to medium and stir in miso mixture and garlic. Return chicken to pan; cook 3 minutes or until done. Remove from heat; stir in juice, capers, and pepper. Serve over hot pasta or rice and top with parsley or chives.

The verdict...(again, I know the. suspense. is. killing. you,) this was a delicious dish. The combination of the wine, lemon, and capers was a winner. This was an easy weeknight meal, that could easily be served as a "company dish" over a nice pasta or rice. We served over simple angel hair.

For wine, we finished the bottle of Tuscan Moon Pinot Grigio that we used for the dish. I was quite surprised by this wine. I originally bought it because it was an inexpensive white, that I could use in cooking. But, when we opened it Tuesday evening to put in the chicken, I snuck a taste. You know...cooking with wine! It had a nice light taste with hints of mineral and citrus. Not in your face, but subtle and it paired completely perfectly with the dish.

Both the wine and the recipe will be keepers for us.
Posted by Mo at 8:08 PM 3 comments:

One of the first things we did when I returned from my 3 week business trip, is head to the Downtown Phoenix Farmer's Market. I couldn't wait to pick up some fresh, local veggies to get back on track with healthier eating. I sometimes get so carried away that we can't fit everything in the refrigerator, and this trip was certainly no exception!

Nothing like a fridge full of veggies to inspire some new creations. After several weeks of missing pizza night, we decided to showcase some of the fresh vegetables on a homemade pizza. Obviously the yellow tomatoes would be the highlight of the dish, but what else to add to it? Fresh roasted orange pepper? Check. Wilted Spinach? Check. Fresh onion lightly sauteed? Check. How about some shittake mushrooms? Sure, twist my arm. Top it all off with mozzarella and a sprinkling of feta, capers, and a little topping of basil from the garden, and we could give any pizza joint in town a run for its money. Or at least we think so. 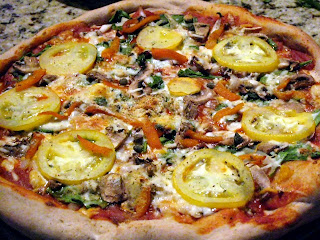 No real recipe here. We used Eating Well's recipe for Whole Wheat Pizza Dough. And, while we have mastered pizza dough, I haven't ever made my own pizza sauce. (Please don't drop your jaws in horror.) I'd be open to recipes if anyone has a good one. So,usually, we use Trader Joe's pizza sauce, but this time we used the Kroeger brand (in a pinch, couldn't get to TJ's.) It worked, but it wasn't nearly as good.

For you purists out there, you may think that nothing goes together better than pizza and a beer. But here at Paws and Pours, we beg to differ. A combination of a bold red wine to pair with the pizza sounded like a good idea. ....

Enter in the Coppola Rosso red blend. This California red blend was a perfect match for our veggie pizza. (We forgot to photograph it.) I pick this one up every so often, because the winery was fun to visit. Playing the soundtrack from the Godfather, we had a whole theme going on.

What is your favorite pizza combination?
Posted by Mo at 5:21 PM 7 comments:

I'm home! After 3 weeks of sales training in Indianapolis, it is time to get back to cooking and blogging. Time to dust off the cobwebs of Paws and Pours. First on the list was to celebrate our first wedding anniversary. The actual date was May 5, (oh yes, Cinco de Mayo!) Of course, at the end of 3 weeks in training, I could hardly concentrate on drugs and disease states. I couldn't wait to take the top layer of our cake out and see if it survived the frosty year in the freezer. (Actually, I think I was more excited to have my freezer space back.)So, here is a little taste of how we celebrated last evening. We started the evening with a glass of Wolf Blass Reserve Shiraz Cabernet blend. I was really impressed with the bouquet. Yummy berries, with a hint of pepper, it was definately a treat for the senses. Yes, some would reserve the 'big red' for dinner, but we sipped while grilling...that's just the way we roll. 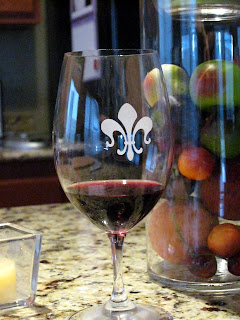 The BBQ was covered with colassal crab legs and various veggies, and sweet potatoes. Here is my empty plate waiting for dinner. (I'm not anxious or anything...) 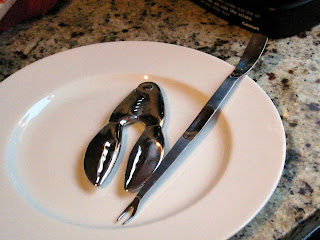 Next off, I went to the dining room and retrieved our champagne flutes from the hutch. These glasses were a surprise from my dad when we sat down at the head table. Aren't they lovely? 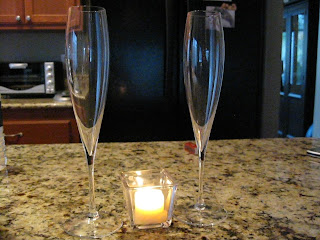 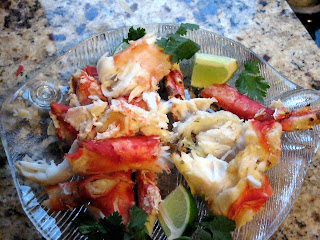 I guess because both Scott and I have not learned to appreciate good sparkling wines, it didn't cross my mind to get one for the evening. So, we used our flutes for the lovely Cline Viognier. Elegant, with hints of honeysuckle, but subtedly buttery on the end, this went perfect with the crab. Again, I realize that starting with the cab, then going to the viognier may seem a bit backwards, but it worked for us.
We enjoyed our dinner al fresco on the back patio. A warm day turned into a splendid evening as the sun went down. 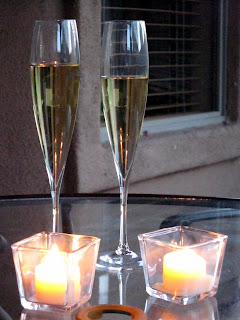 After feasting on the grilled crab, finishing off more wine, and soaking in this amazing warm weather, we were ready for the grand finale. My mom wrapped it very diligently. We unwrapped at least 2 layers of aluminum foil before coming to about 3 layers of plastic wrap. She is very thorough... 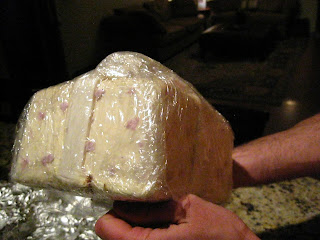 The results...pretty much intact. Slightly smooshed on the bow, but not bad. 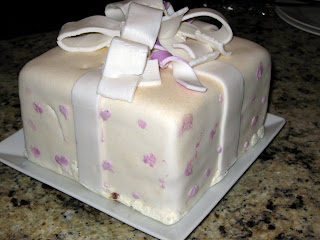 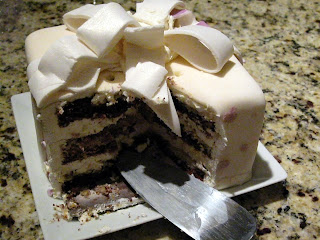 The verdict on taste...74 points. Not bad, considering it weathered a full year in the freezer. I think it might have actually been really good, had I chose a better, or more interesting flavor combo for the top. The marble and buttercream/fondant, was, well...meh.

Ah, a full year. I'm sad not to be considered a "newlywed" any longer, but happy to have the best husband and best dog a girl could ask for. Here's to many more.