Clearing out the sinuses 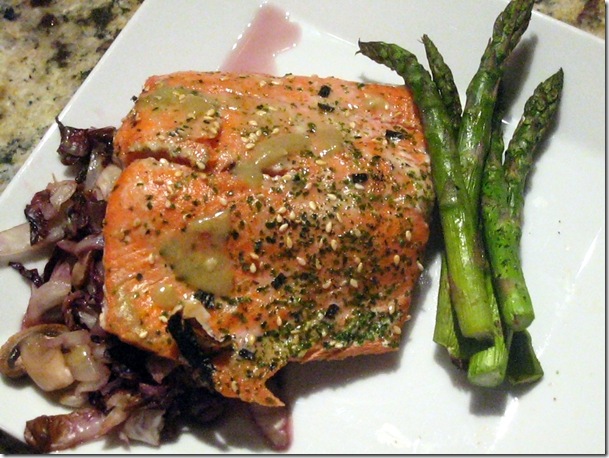 So because Sudafed, Afrin, and Nasogel have failed me, I decided to try my homemade method for clearing things out…wasabi!  (aka green powder crack!)

I found this recipe for wasabi roasted asparagus the other day on the Fatfree Vegan’s blog.  Of course, she had me at wasabi, but the asparagus really clenched it.  When I found asparagus on sale yesterday at the market, I knew I would be making this recipe soon.  I could have stopped there, but I decided to couple that with my wasabi salmon recipe and really feel the burn!

First, the star of the show: 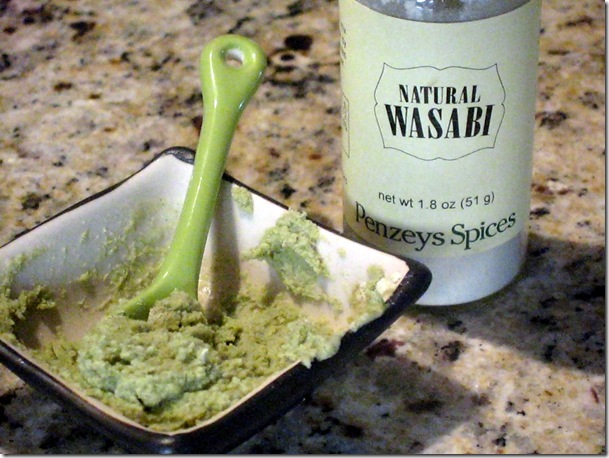 You can buy wasabi paste premade, but I find the powder more convenient.  It lasts longer and you can make as much or as little as you need anytime.  Mix, equal parts powder and water, and let stand for a few minutes.  I made enough for both of the recipes.

Instead of roasting the asparagus, I bathed it in the marinade and put it on the grill with the salmon.  I think it would have been better roasted, as I really could not taste the wasabi sauce at all.  Or maybe I should have just used more?   Did I mention that I love wasabi? 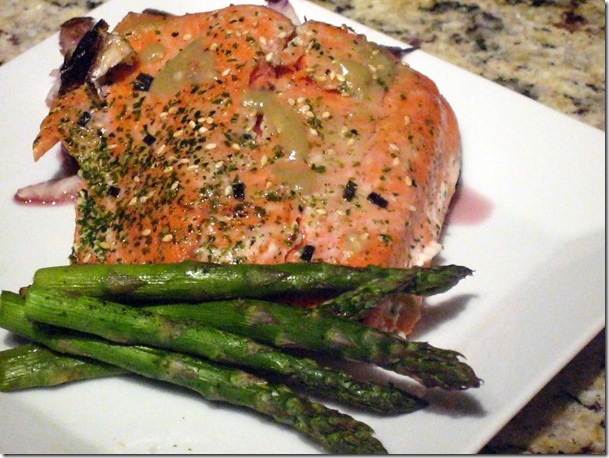 The verdict:  wasabi, you didn’t let me down!

That looks amazing. I've been suffering from the same exact thing and have been worried that I'm actually allergic to dogs. I have never had allergies before and was convinced it was a cold, but the pharmacist encouraged me to get allergy medicine anyway based on my symptoms. I guess what I really need is your salmon.

Maureen this is just incredible. I love it, so beautiful and flavorful to boot!

OMG I would love this with or without sinus problems! We just recently had the BEST wasabi-crusted steak at this Asian restaurant in SoCal. I've been planning to try and recreate it. Although salmon's a pretty good idea too!

Beautiful meal! I am a huge wasabi fan and the combo with salmon and asparagus sounds fabulous!

I always forget about cooking with wasabi!! You just reminded me how much I love it!! Thanks for the study wishes :)

I found you on food buzz and I hope you don't mind I added you to my links on my blog. I am a huge dog lover and a food lover in the Scottsdale area as well.

Probably should have posted that comment using my correct login, but yes I do also have a blog for my dog :)