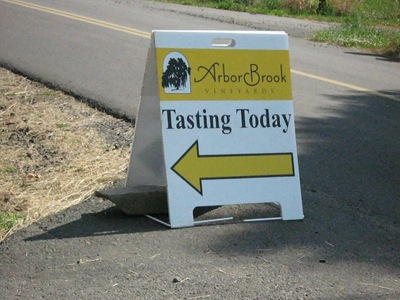 We jump at any chance we get to escape the heat of summers in Phoenix. After nearly 3 weeks of 110+ degree highs, spending the 4th of July weekend in the Pacific Northwest sounded like a perfect escape. What better way to add to the enjoyment than to add some vineyard tours to the mix? After spending much of the weekend with friends in Seattle, a single stellar bottle of wine had us nearly convinced to check out the wine country in eastern Washington state. However, we decided to stick with our original plan of visiting Oregon wine country.

We knew there were a lot of vineyards in Oregon (and specifically in Willamette Valley), but didn't realize just how many there are (see OregonWineCountry.org for a map). So many choices, so much wine, so little time...the biggest decision seemed to be what vineyards to visit. 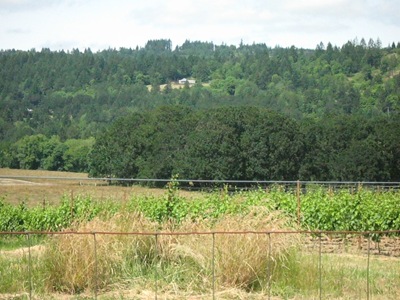 First up, we knew we wanted to check out Adelsheim, one of our favorites from Oregon (blogged here). Adelsheim is located at the base of the Chehalem Mountains just to the southwest of Portland. The tastings were great, all from a selection of the various Pinot Noirs and Estate Pinot Noirs. Our favorite is still intact -- the plain vanilla Adelsheim. 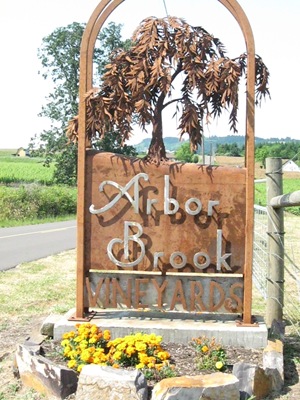 With the late start on the tours (after driving down from Seattle), we settled for vineyards that were nearby. Next up was the adorable ArborBrook Vineyards. A relatively new vineyard (first planting in 2001), the tasting consisted of a duet of Pinot Gris and Pinot Noir. The 2007 Ana Vineyard Pinot Gris had a good hint of citrus with a soft texture and a clean finish. The 2007 Oregon Pinot Gris was very similar, however with 100% stainless steel aging this one was cleaner still, with no hint of oak. 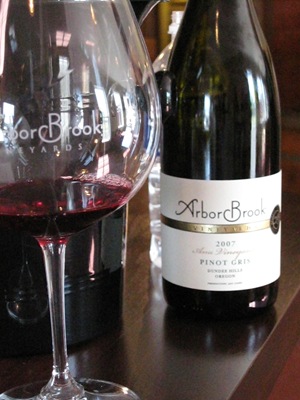 Now onto the reds: The 2007 Pinot Noir Estate 777 Block has a great black cherry and currant nose, with a velvety finish. Finally, the 2006 Vinter's Select Estate Pinot Noir had a similar taste and texture, with a touch more smoothness and a richer fruit taste. All were very good -- the vineyard has some great character, and Dave- the owner's willingness to talk about wine and the area (and make some recommendations) was very worthwhile. 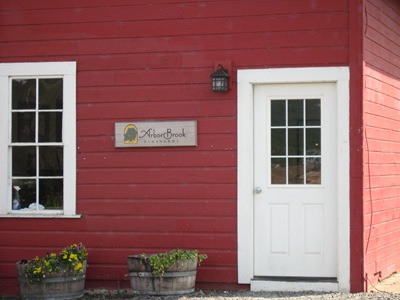 With a few of the recommendations already closed for the day (Dave said most would already be sampling their wines), our choices were somewhat limited. But we managed to find Aramenta Cellars, another boutique vineyard in the valley. The same family has owned this land since the turn of the century, originally growing nuts and fruits and turning parts of the land to vineyards in the early 2000s. 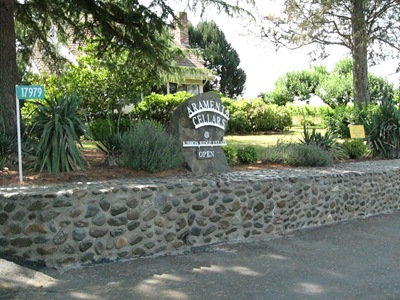 As we pulled up the drive, one of the owners (and her grandson aka "the next generation") came out to greet us. Aramenta has working tasting room, with barrels of wine being aged before your eyes. 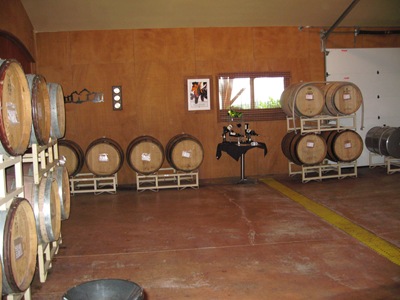 Our tasting consisted of 3 wines: the 2006 Chardonnay; the 2005 Pinot Noir, and the 2006 Pinot Noir. The best way to describe these is that the vineyard had character, while the wines did not. Wine is an art -- sometimes the mastery of viticulture is very different than simply being able to grow grapes. But regardless, we had a good time. 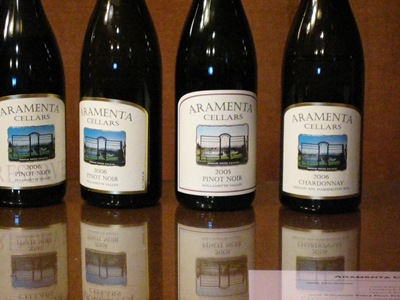 That finished up our quick tour of the Willamette Valley. We know we'll be back for more when we next get a chance! 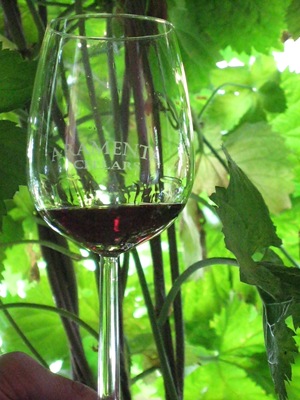 I haven't spent too much time in the Pacific Northwest, but it looks so lovely and charming! I'm bookmarking these wineries for a future trip. Glad you had fun & escaped the heat!

Sounds delightful! I'll have to see if any of these wines are distributed in our area. I love Oregon Pinots, & I keep saying that we'll take a trip there one of these days. We will...just not yet.