I’ve been doing some spring cleaning the past couple weeks, and really trying to simplify and de-clutter.  In the process, I wanted to get rid of old issues of Cooking Light and Food and Wine.  I mean, there is no sense in keeping all these, when recipes are online these days, right?  Well, I couldn’t help but flip through each magazine before throwing it in the recycle pile.  Hence, the reason it is taking me weeks…

In one of the back issues of Cooking Light, March 2007 to be exact, I found a recipe that I thought would make a great Meatless Monday meal.  Black-Eyed Pea Cakes with Collard Greens.   It was part of a Southern Cooking feature article and sounded like something we would really enjoy.  Since the recipe used canned black-eyed peas, I thought this would be a quick and simple meal for a Monday evening.  Well, it wasn’t as quick as I was expecting.  The bean cakes need to be made and then refrigerated for 15 minutes, and the greens simmered for 45.  The bean cakes were quick to throw together, and next time I would skip the step of sauteeing the garlic and onion before throwing in the food processor.    After I got started making the dish, I opened the refrigerator and realized we finished the fresh collard greens that I had purchased for this recipe. We were having fun using them to make little appetizer “wraps.” So, since we always have Red Chard on hand, I made that quick substitution.

I apologize in advance, this dinner wasn’t the most photogenic. 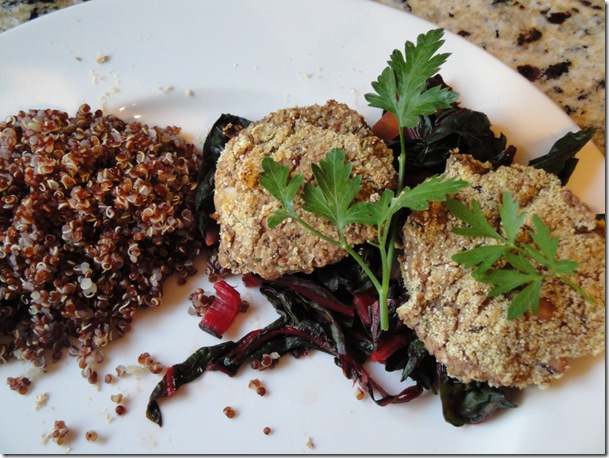 Like I said I substituted chard for the collards, and the only other thing I did differently was to use vegetable broth rather than chicken broth to make it truly vegetarian.   Rounding the meal out with some red quinoa for extra protein and whole grains.

Here’s a picture from our weekend adventure – hiking in Payson Arizona along the beautiful Christopher Creek. Is it still considered southern if I used chard instead of collard greens?

I personally can't tell the difference between collard greens, chard, mustard greens and kale so I say "Yes, it's still Southern!"

mmmmmmmmm FRANK'S HOT SAUCE!! I LOVE the puppy picture!! Arizona is on my list of places to go!!

Looks delicious even if you personally do not feel it is a repeater. I REALLY should go through and do the same thing with my magazines. I really need to declutter -- a dog who loves to get into everything is reinforcing that for me. I'm already planning on purging all the books I know I will never read again either by donating them or selling them...we'll see how that goes.

Being vegan, I love this food idea! Thanks for your recent post, I thought I was full from lunch, but it got my mouth drooling nonetheless, haha :)

I also wanted to touch base with you about a cool idea for your blog. Please email me when you get the chance: stacy (at) americanwinery (dot) com