For months, my friend, and fellow foodie, Renee, and I have been talking about getting together to cook crab cakes. It seems that with our busy schedules, and me being out of town work training, it just kept getting put off. Well, by the time we got a date to do it, we had another couple interested in joining the feast. Awesome, the more, the merrier. So, the only thing left was determining the recipe.

I had made them once before using this recipe. Renee saw a recipe in Cooking Light recently, that looked good. We couldn't decide. We also knew that the other couple joining us can whip up some fantastic creations as well. Decisions, decisions... so... we decided to do a little crab cake cook-off! Each couple was to choose a recipe and make enough crab cakes for each of us to try.

This past Saturday night, while it was 115 degrees outside, we had our crab feast inside. We started with this salad of Grilled Peaches over Arugula with Goat Cheese and Prosciutto. Simple, sweet, peppery goodness that was light enough to save our appetites for all the crab that was about to be consumed. 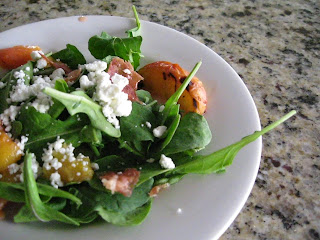 Since Chardonnay was listed as a great pairing with crab, we started with the Alpha Omega 2005 Chardonnay from Napa Valley. This was a gift from a friend who was recently in Napa. I'm not the biggest fan of chardonnay, and this one was a little too toasty and oaky for me. 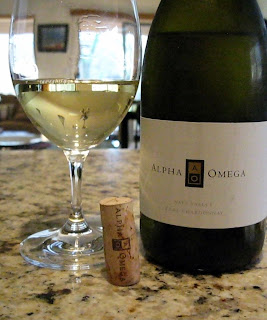 First up on the "fishy plate" are Renee's. She went with the recipe that was in Cooking Light. Look at the nice big clumps of crab just oozing together on the plate. This was a really good recipe to showcase the crab. They were not overly breaded or mayonnaised as some crab cakes can be. Seasonings were spot on - enough that it enhanced the crab, but not overpowering. Awesome execution by the chef! 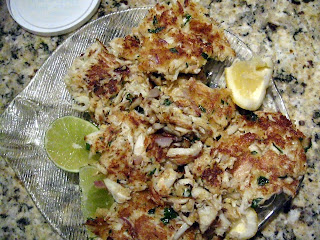 Next up, are the ones that I made, following the recipe I posted here. We also made the fennel slaw again, using red cabbage in place of green, for a little color. When comparing, my recipe was quite similar to the Cooking Light one, save for a few ingredients. We all liked the addition of the fennel slaw, but I think Renee's crab cakes were a little better. Next time, I would use that recipe with the fennel slaw. 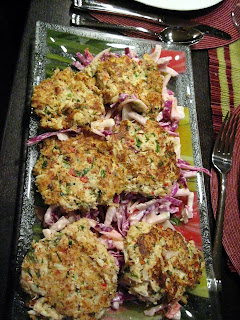 We were now onto the second (or was it third?) bottle of wine. This time it was the 2006 Calera Central Coast Chardonnay. This was bright and crisp, with a little pear and apple. I got hints of oak, but not overly so. This one really hit the spot. I would definately get this one again as it will be a great picnic or BBQ wine. 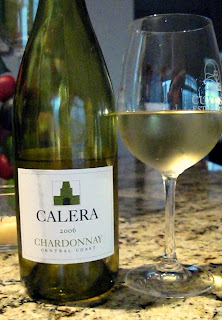 Last, but certainly not least, is the rendition by Dana and Dana. Yes, we actually have friends that are dating each other that both have the first name Dana (or as we call them, "She Dana" and "He Dana"). Cool huh? They did an Emeril - version. A little spicy and a lot tasty! Mmmm...very different than the first two, and a welcome change of taste. The spicy roumalade sauce on top really made the difference. 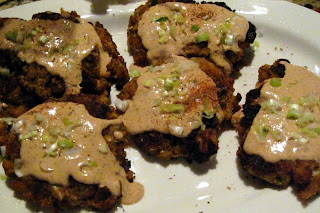 After we had stuffed ourselves with crab you think we'd be done right? Well, no. actually. Luckily, I found friends that enjoy dessert as much as I do. Renee and John brought us these fantastic little glasses of love. Fresh raspberry trifles. Look how smashing they look in their own individual trifle glasses. 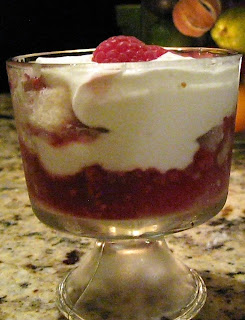 Since it was a special night, with special friends, we pulled out the bottle of dessert wine we had received as a wedding gift. The 2005 Raymond Eloquence is a late harvest chardonnay. It was sweet and deliciously flavored of peach and apricot. A few sips was all that was needed to enjoy this luscious ending of our great night. 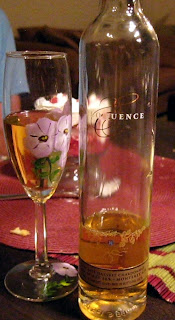 Yum, everything looks quite tasty. I haven't yet mastered crab cakes so I may look up the CL recipe. The Emeril version looks great as well.

What are the chances of two Danas getting together. Pretty cool.

Wow that sounds like so much fun! Now I have some recipes to pick from the next time we have leftover crab from our favorite crab legs.

What a great idea, a crab cake cook-off! I may have to steal the idea...While I'm also not a fan of most Chards, I may have to seek out the Calera - it sounds like one we might enjoy. Next time you make crabcakes, try a Verdejo or Viognier if you haven't already. We've had great success with it!

That looks wonderful! I am especially excited about the trifle. It's my favorite summer dessert, and I seldom make it. Thanks for the push I need to pull out a good recipe.

Thank you for the wine recommendations. I too am not a big fan of Chardonnay. I really dislike the heavy oak you often find in California Chardonnays. I will make note not to buy that first bottle.

I did do a Chardonnay tasting at a wine bar a few months ago and it opened my eyes a little bit about the Chardonnay grape. I discovered it was the oak I didn't like; not all Chardonnays, or wines made with the Chardonnay grape, have that. So I try to do a little investigating before ordering/buying (rather than avoiding altogether).

Oh the decadance of this meal is so perfect. It looks wonderful!