I used to be a traditional tomato sauce, mozzarella, and mushroom - girl only. While I still love a great traditional-style pizza, I like trying new combinations. With the help of some of the comments you all made here the last time we made pizza, as well as lurking around some of your lovely blogs,we had several ideas this week. I couldn't narrow down the choices to just one. So, what did we do? We made three!

The first one was my attempt at cleaning out the refrigerator. As it turned out, it is one of new favorites.
Here is what it had; cilantro pesto (replace cilantro for basil in your favorite pesto recipe)
roasted corn
a handful of grape tomatoes, halved
thinly sliced zucchini
thinly sliced Granny Smith apple
a bit of carmelized onion
I didn't put any cheese on this one, but a cojita or other Mexican white cheese would be great, as would a pepperjack.

The second one we made was a Mediterranean pizza that I got out of Vegetarian Times. We loosely followed the recipe because the picture in the magazine looked quite tempting. While it was good, I would have probably added some kalamata olives or artichokes to give it a bit more flavor. Nice cheesy mounds of feta and ricotta gave it just the right amount of richness. You get a healthy dose of antioxidants by the addition of fresh spinach, and lots of tomatoes.

Finally, the third is one that I've done countless variations on the same basic theme - figs. Dried figs, rehydrated in port, with carmelized onion, shittake mushrooms, a drizzle of balsamic syrup. All topped with goat cheese, although I prefer gorgonzola when I have it. (Oh dear, my piece here in the picture has been invaded by the cilantro pizza and seems to have gotten some tomatoes spilled on it. Talk about cross contamination...)

Here is a picture of my plate with a taste of all three. 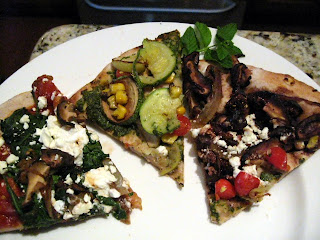 The first pizza you made is a combination I tried about a month ago- roasted corn, tomatoes, goat cheese, gorgonzola, cilantro, red onion. It was AMAZING and my new favorite combination. I love that you had it too!

I adore the frozen roasted corn from Trader Joe's. Little nuggets of gold, I love them in salads too.

Cin Cin! Have a great weekend!

Thanks for stopping by! I love your blog. The pizza, by the way, looks delicious.

oh, le drool. why don't i have pizza night? i must rectify that immediately.