Note: Today's guest post is by Scott aka "the prep bitch"
While my bride was out for a business dinner, I decided to forgo wine for the night (and believe me, that is a sacrifice) and to do some beer tasting instead. Luckily, the Total Wine store has a great selection of beers by the bottle. The downside? Walking through a store that literally has thousands of bottles of very tempting vino. Ok, stick to the plan. Tonight is beer night.

Much like with wine, the trick is to find those good "undiscovered" vintages. Lacking any more direction than the "paws" of Paws and Pours for inspiration, I decided to pick beers with dogs on the label. I'm sure it sounds lame, but it seemed reasonable at the time. And I was really thirsty and wanted to get those beers in the fridge.

First up: Spanish Peaks Brewing Company's American Pale Ale. A medium-bodied amber pale ale, this one had a bit too much hops for my taste. 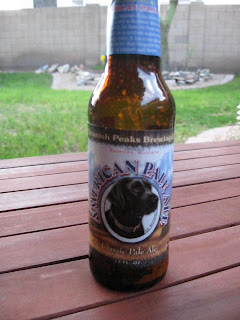 Next up: Sun Dog Amber Wheat. Since I usually like wheat beers, especially in the warmer months, I thought this would be good. Turns out it was good, but not great. Sun Dog Amber is a a light to medium amber, with a hint of citrus. A nice warm weather brew to cool off after being in the sun. 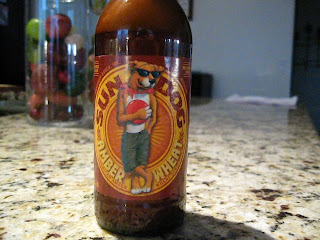 Nothing too outstanding for the night....I think I'll stick to wine next time....
Posted by Mo at 7:53 PM

Hey I love the dog brew...but not as much as wine.

seriously loving Scott's title "the prep bitch"! i see how he ranks in your kitchen. bummer the beer was a let down.